Skip to content
Trade Knowledge Exchange > Commentary > Uncategorised > A tricky triangle: the UK’s negotiation positions for FTAs with the US and the EU

The UK has published, in quick succession, its negotiating position for free trade agreements with, respectively, the European Union and the United States. It is an ambitious project. Few countries have attempted parallel bilateral negotiations with both the US and the EU simultaneously. Substantial differences between these two parties, especially on key issues of regulation, mean that the UK will be confronted with key trade-offs across both sets of  negotiations. These are on top of  the trade-offs across sectors and issues that typically arise within a negotiation.The confluence of these two negotiations allow us to look at the distinctive features of the UK’s position in each, and the linkages between the two.

The UK ‘s position vis a vis the EU

The UK’s approach to the EU is that it wants the negotiations to proceed as if it were any other non-EU member state. The primary model it has in mind is Canada. Indeed, the way in which it sets out its position seems to consciously mimic the structure of EU-Canada FTA (CETA). The UK also seems to have drawn some inspiration from the Swiss model. The second part of its position  is  based on  a series of bilateral agreements covering specific issues and that are not subject to dispute resolution mechanisms under the main FTA.

The approach is governed by two overarching objectives: not to be subject to level playing field requirements by the EU (i.e. to implement specific rules on state aid, competition policy, environment and labour); and to avoid a requirement to transpose EU regulatory practices. On the latter front, the idea of a common rule book for goods floated by Mrs May’s government has been abandoned in favour of an approach based on mutual recognition and equivalence. Th EU for its part has made complete tariff and duty free access to its market conditional, amongst other things, on level playing field requirements.

The UK’s position vis a vis the US

The UK’s position paper for a FTA with the US  consists of a set of aspirational objectives, and an economic study. The latter is a very useful contribution. For a start, it is rare to see an evaluation of such depth appended to negotiating objectives. Secondly, it allows to us ascertain the nature of the FTA that the UK envisions, if anything  more clearly than the objectives themselves. The modelling identifies tariff cuts and limited liberalisation to non-tariff measures in goods and services. It is, in other words, the FTA envisioned with the US is qualitatively  similar to the sort of FTA the UK currently envisions with the EU.

There are some obvious differences between the two. Strong statements on health, pharmaceuticals and food standards set out the UK’s red lines vis a vis the US, in the same way that statements about  level playing fields and regulation do vis a vis the EU. Indeed, one can interpret some of these statements  in the US ppaper (notably about environmental protection and food safety) as much as a signal to the EU as it is to the US.

The UK’s negotiating position vis a vis the US also includes a section on government procurement, which has been left out, perhaps surprisingly,  of its objectives vis a vis the EU.

We have at various points quantified the relative impacts of different FTA scenarios vis a vis the EU and the US. The label “Vanilla” describes the type of FTA to which the UK seems currently to aspire in relation to both the UK and the US.  “Deep” refers to an agreement that is similar to the EU single market arrangements. “Hard” refers to the UK trading with the EU on MFN terms. 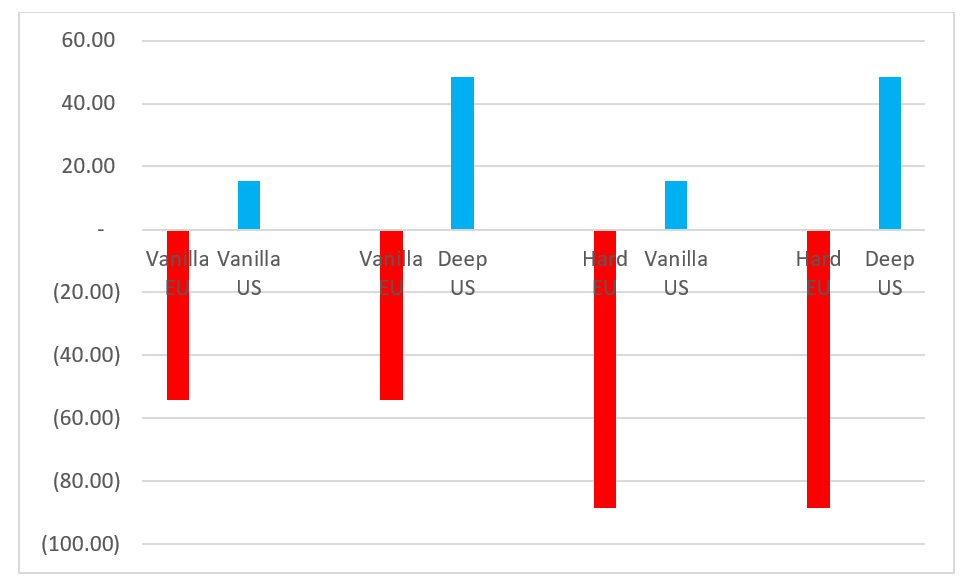 The main messages are that:

Where does this leave the UK, and its partners?

The general thrust of this analysis and its implications have been known for some time, including, as we have seen, by the UK government. The government’s analysis, contained in the US negotiating objectives publication, is consistent with it. Taken together with the analysis it produced on the long term effects of exit, it shows that the a scenario in which the UK signs a vanilla FTA with the EU and does the same with the US will leave the UK worse off, by a considerable margin.

The UK government’s work injects a welcome does of realism into a discussion previously exposed to hyperbolic political statements on all sides.  One of the oddities, if not ironies, is that the quantitative work done in relation to the US FTA highlights the downside risks of the UK’s position vis a vis the EU.

Within this overall framework, what are the options? As far as UK and EU trade is concerned, both parties have an interest not to increase the costs of trading with each other. UK businesses will need to meet EU regulations to supply EU markets, and the same applies to EU businesses supplying the UK market. Regardless of what is put into formal treaty terms, there is a strong impetus to retain a high degree of convergence. This is also true from a geopolitical perspective.

The main danger is that a push for legal purism – mainly on the part of the EU- could rule out the possibility of any agreement. That would in turn cause trade costs to escalate.  This means that both parties should retain a pragmatic approach to minimizing losses.

The second point is that given the breadth of issues to be covered, and the UK’s red lines, negotiations with the US will require time. With the US presidential elections looming, the window of opportunity seems very small indeed. Similarly, given their relative magnitudes, and the potential downsides to harder forms of EU exit, it makes sense for the UK to prioritise its negotiations with the EU. Setting that baseline will also give the UK a better idea of what adjustments it can make to matters such as regulation.

The argument is sometimes made that holding the two negotiations simultaneously could give the UK more leverage. But this is not guaranteed, and the reverse may be true. For example, if the US knows the UK is desperate for a quick deal, it will be minded to push the UK harder on sensitive issues.  It is also possible that parallel negotiations  will overburden the UK’s negotiating capacity and make sub-optimal outcomes on both negotiations more likely.

The  publication of the negotiating objectives for its FTAs for the US and EU gives an indication of the scale of the challenge facing the UK, and also the EU. Both, on the UK government’s own numbers, face significant downside risks based on their current preferences for a FTA (setting aside the risks associated with a failure to agree any FTA). The UK’s own modelling accepts that the negative effects of a weak FTA or no FTA with the EU will only find limited mitigation through a FTA with the US. That recognition, even if limited to technocrats, should provide an impetus for both the UK and EU to find creative solutions to avoid an impasse. The US, for its part, has the least to lose on these matters, and can sit pretty knowing that it holds most of the cards.